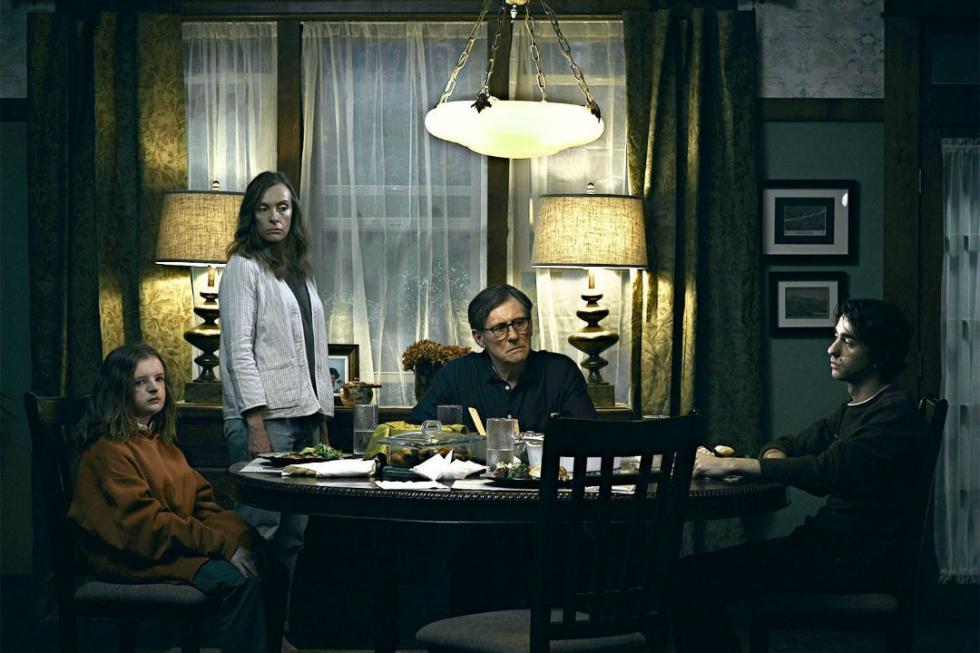 Ari Aster’s superb debut horror film “Hereditary” is so methodically stretched out-- using every second and minute of its runtime to ratchet up suspense and generate terror. It’s relentless but in a subdued and quietly unnerving way. From the very beginning, the movie grabs you by the neck and holds you in a state of stress and uneasiness, not letting go until the final credits. Even the most mundane domestic scenes have an atmosphere of unshakable menace hanging over them. Aster constantly keeps you on edge; you’re always waiting for something bad happen. Yet, when the bad things happen they’re never less than nightmare inducing.

“Hereditary” opens on a run of the mill obituary, as if it was clipped directly from a newspaper and put on screen. That obituary is for Ellen, the mother of Annie Graham (Toni Collette giving a layered, frantic, manic, sympathetic, powerhouse of a performance). There’s a funeral service, attended by Annie, her husband Steve (Gabriel Byrne) and their kids Peter (Alex Wolff) and Charlie (Milly Shapiro). Somberness is in the air but there’s also a sense of tension, even relief.  When the Graham family returns to their giant wooded house (that’s practically engulfed by a surrounding greenbelt), Annie asks Steve if she should feel sad. Without giving away too much, lets just say that spooky things start to happen and dark family secrets surrounding the late mother gradually come to light.

Aesthetically, “Hereditary” is overdetermined, which contributes to its overall sense of dread. Cinematographer Pawel Pogorzelski captures the action primarily via long shot (both in terms of shot duration and distance from the characters) with a lot of slow, careful pans and zooms. Meanwhile the blocking is overly stagey; Annie and the rest of her family move around their massive, empty house in a heavily controlled manner. The film’s Mise- en-scene is reminiscent of Wes Anderson’s dollhouse style. Of course, here it’s used for more sinister purposes.

On the one hand, it directly mirrors Annie’s profession as a miniatures artist; she meticulously recreates scenes from her life with balsa wood, paint and figurines. On the other, it underscores the tragic and terrifying way in which the Graham family is carefully manipulated by various shadowy forces around them. Much in the way Rosemary (Mia Farrow) from Roman Polanski’s classic chiller “Rosemary’s Baby” gradually loses her personal agency, so do the Grahams.

Aster’s screenplay does such a brilliant job of keeping you in the dark about what’s really going on until the last scenes. The central mystery is surprisingly intricate and though you’re given hints throughout (so none of the major plot points or twists feel like they came out of nowhere) Aster doesn’t hold your hand. There are no flashbacks or contrived moments of exposition. Sometimes you can detect crucial bits of information through casual dialogue exchanges, other times you’re picking up clues at the same time the Graham family does.

And then there are questions, regarding Ellen’s past activities and relationship with Annie, that aren’t definitively answered, leaving you to fill in certain gaps yourself. Even the final scene, which reveals quite a bit, doesn’t neatly explain everything and tie up every loose end. So, while “Heredity” ultimately rewards your patience, it still requires your undivided engagement and leaves you with plenty to mull over.

Furthermore, the slow burn approach allows Aster to sufficiently develop the relationship between the central characters (which gradually evolves from frayed to destructive). If you remove the more conventional horror movie aspects from the film you would still have a compelling, anxiety ridden family drama. “Hereditary” is about the horrors of parent hood and family life; coping with personal tragedy, trying to repress simmering resentment you hold towards your loved ones and the fear of not being able to protect your family from outside forces (and yourself).

Aster takes the time to dig into these anxieties through tense and emotional confrontations between family members. The scene in which Annie wakes Peter up in the middle of the night with a surprising and horrible confession is both terrifying and heartbreaking. You come to care about the Graham family.

Often times in horror films we could care less about the victims who are being haunted by ghosts or slaughtered by killers. In fact we may even cheer on their deaths. In great horror films we are genuinely invested in their livelihood and we don't want bad things to happen to them. We can’t stand to see Rosemary be taken advantage of and manipulated. We don’t want to see the Graham’s routinely tormented. Our empathy makes the horrors in “Hereditary” all the more bone chilling and its immaculate craftsmanship all the more impressive.
Posted by Drew at 8:51 AM 1 comment: